“The best and most beautiful things in the world cannot be seen or even touched. They must be felt with the heart”
– Helen Keller

Acting with others in an effort to change something, or create something is inescapably emotional. This is a good thing. Emotional connection motivates people. It feeds their passion for achieving a vision of something better. It isn’t our job as leaders to tell people how they should feel. Everyone’s unique life experience, relationships, and knowledge inform their emotional state. Navigating something this complex requires that we develop some degree of emotional intelligence.

“Emotional intelligence is the ability to monitor one’s own and other people’s emotions, to discriminate between different emotions and label them appropriately, and to use emotional information to guide thinking and behavior.”
– Wikipedia, http://en.wikipedia.org/wiki/Emotional_intelligence

The chart below is quite different from other tables we’ve explored. It is Robert Plutchik’s Wheel of Emotions. The most intense emotions are in the inner circle. The next ring consists of Plutchik’s eight primary emotions—anger, fear, sadness, disgust, surprise, anticipation, trust, and joy. These are the emotions that he says trigger actions that we use to survive, such as the fight-or-flight response. 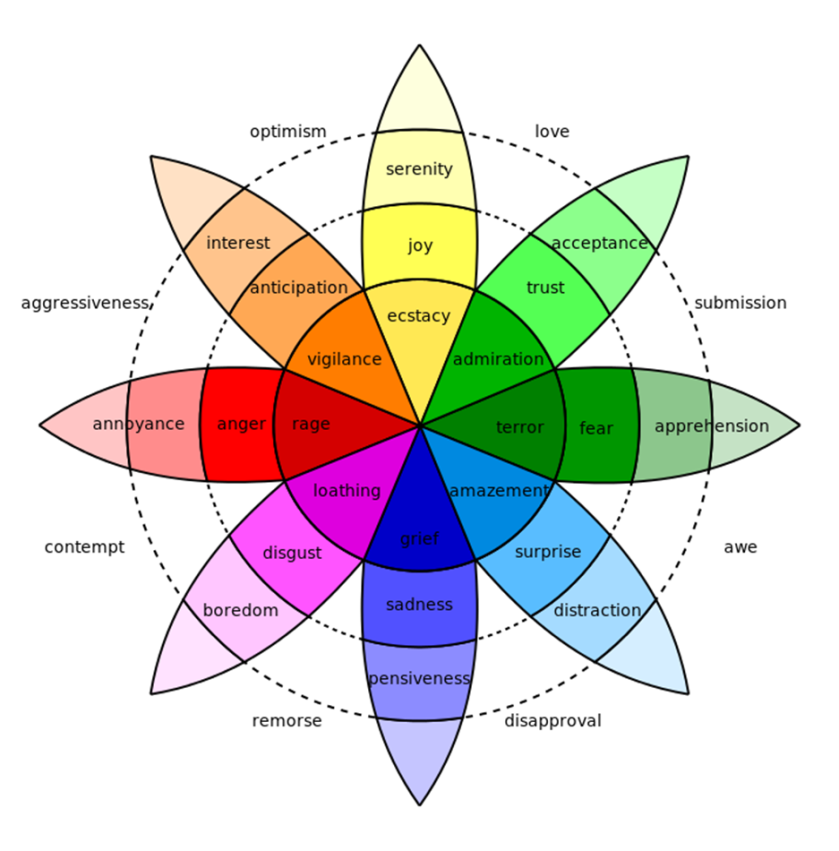 How is understanding this useful in leadership? Well, for example, if you look at the annoyance/anger/rage continuum, you probably know from experience that people are less likely to act on changing things that are simply annoying. It is also best if a problem has to get to the point of outrage before people act. Knowing when folks are angry enough to act to create change is important.

You don’t need an advanced degree in Psychology to develop emotional intelligence. There are some simple things you can do. The Internet is full of free help on this front, so I won’t go too in depth here. The most important things that you can do fall into two general categories: 1) becoming more self-aware; and 2) increasing your empathy.

Self-awareness requires articulating what you believe, why you believe it, as well as what you are thinking, and feeling. I’m not talking about being in a constant state of navel-gazing. It’s more a matter of taking a second during that time when you are thinking before you speak (You do that, right?), and asking yourself if you understand why you are saying what you are saying.

There are many other things that will improve your self-awareness. Daily writing is an easy one. It can be public or private, and doesn’t need to be lengthy. Try tweeting thoughts that are important to you, not just ones that you hope will be perceived as clever or funny.

If daily writing seems too burdensome, try writing a brief bio of yourself that contains no information from your resume. If you are looking for a less direct window into yourself to begin with, write about someone you admire, and explain why you admire them. It will tell you something about your own values.

Ask good friends, and family members how they perceive your character, attitude, and the general impression that you give . If they tell you things that surprise you, then you can take that opportunity to both further develop assets that they see in you, as well as work on negative aspects of their perception of you that they identified.

The most important path to developing empathy is to listen to people, REALLY listen to them. Believe what they tell you about how they are feeling. Don’t necessarily live by the so-called golden rule – ‘do unto others as you would have them do unto you.’ Consider this instead: “do unto others as others would have done unto themselves.”

As a leader, social responsibility is perhaps the greatest manifestation of emotional intelligence. It recognizes our interconnectedness, and our realization that, as Paul Wellstone put it, “we all do better when we all do better.”