“Intelligence is the ability to adapt to change.”

Although I agree that it can come in useful on certain occasions, if you were hoping for tips on reconnaissance or spying, you are going to be disappointed. I apologize. I am using “intelligence” here in the context of acquiring skills, habits, and knowledge that help you better understand yourself, and other people.

We frequently think of intelligent people in terms of academic achievement. People with academic intelligence are logical, and seek evidence based on the analysis of data. They remember theories, and formulas. They got good grades in school.

I like the definition of emotional intelligence on the helpguide.org website it says that “emotional intelligence is the ability to understand, use, and manage your own emotions in positive ways to relieve stress, communicate effectively, empathize with others, overcome challenges and defuse conflict.”

We are passionate about the things we want to change in the world. Passion and emotion go hand in hand. We feel the desire for change on a very personal level. The emotions of both our allies, and our rivals run deep. Emotions can lead to deeper ways of knowing. They can also inflame tensions.

Things you can do to develop your emotional intelligence include:

Social intelligence is developed through experience. Unfortunately, we cannot anticipate every circumstance and event in life. We can’t fully cultivate social intelligence simply from educating ourselves. Sometimes our interpersonal interactions do not go well. Recognizing why those exchanges went poorly helps us learn from our mistakes.

Leading change requires diplomacy. Good diplomats have social intelligence. They show discretion and thoughtfulness in their interactions with other people. Tactful consideration for others builds trust, and trust is priceless.

Healthy personal relationships are at the core of every level of positive change. We do not walk the world alone. In the words of the late American radio personality Earl Nightingale, “Getting along well with other people is still the world’s most needed skill. With it…there is no limit to what person can do. We need people, we need the cooperation of others. There is very little we can do alone.”

Existential intelligence is all about bringing out the philosopher in you. It involves thinking deeply about the big picture. Pondering existential questions is often related to the desire to create social change. For example:

Thinking about life’s big questions can lead to people evaluating their values, and making changes in their lives in an effort to take responsibility for their actions based on those values. People leave “successful” careers to work at making the world a better place. (See the post, “Narrowing the Gap Between Our Ideal and Our Real Values”). You may not spend countless hours contemplating existential questions, but whatever time you do spend will always be time well spent.

We experience conflict every day. Every time you make a decision you are to some degree, resolving conflict. For people organizing to create change, conflict sometimes needs to be resolved between allies, and of course, always needs to be addressed with adversaries.

Rather than survey the mountain of literature available on the topic of conflict resolution, let’s focus for now on two things. First, we’ll explore Kenneth Thomas and Ralph Kilmann’s, Five Modes for Handling Conflict, and think about how they might relate to leadership. Secondly, we’ll address the notion that conflict – this thing that we’d all just like to go away, actually has numerous benefits that can help to develop other areas of our capacity to lead. 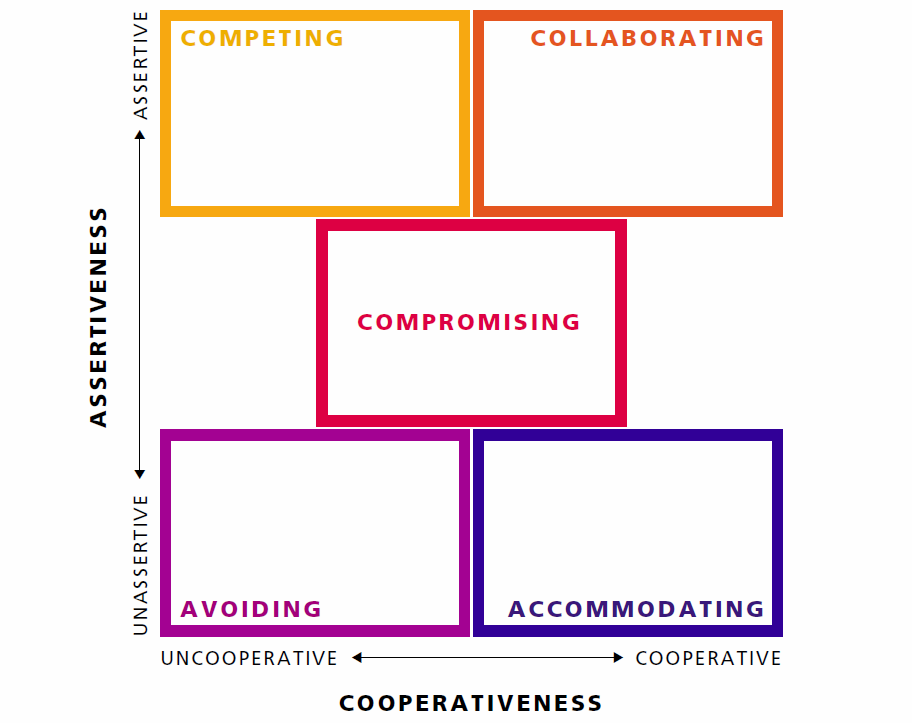 According to Thomas and Kilmann, our behavior in conflict situations focuses on two dimensions: 1) assertiveness (What’s in it for me and how do I get it?); and 2) cooperativeness (How can I satisfy others’ concerns?). Leadership means having to constantly balance these dimensions in order to move closer to your desired outcomes.

Competing – Everyone uses all five of these modes of conflict resolution. More often than not, however, competing gets the most attention. When you are trying to make specific changes in the world, a zero-sum orientation is often where you find yourself. A referendum passes or fails. A candidate wins or loses. The key for leaders is not to let this single-mindedness spill over into every interaction, because the next success might depend on collaboration with one of your winner-take-all victims.

Avoiding – dodging conflict for the sake of appearing neutral can have a similar outcome to any aversion to risk – no pain, no gain. Removing yourself from a situation could mean not benefitting from the gains resulting from the successful resolution of the conflict. Leaders should to at least some degree, embrace conflict rather than avoid it.

Accommodating – allowing an unchallenged “win” in an effort to not rock the boat is a situational judgment call. What is the return on the investment of this good will? One warning, accommodation is also where a lot of ethically questionable behavior resides – like spinning something to make yourself look good, and the other party feel good,( “let’s let them think that they’ve won this, meanwhile we’re sticking it to them over here”).

Compromising – This is what used to happen in politics. People agreed to something that was tolerable to all parties, and maintained some sort of reasonable working relationship. Granted, compromise usually ends up in only baby steps forward, but small steps ahead are better and no progress at all, or backwards movement.

Collaborating – This is the elusive “win-win” situation. The value in collaborating lies in capitalizing on diversity – diversity of ideas, of approach, of notions of success.

Conflict Can Have Benefits

Try to look at conflict beyond simply being something that you want to go away quickly. You might see that it has some benefits. Here are some of them:

“The best and most beautiful things in the world cannot be seen or even touched. They must be felt with the heart”
– Helen Keller

Acting with others in an effort to change something, or create something is inescapably emotional. This is a good thing. Emotional connection motivates people. It feeds their passion for achieving a vision of something better. It isn’t our job as leaders to tell people how they should feel. Everyone’s unique life experience, relationships, and knowledge inform their emotional state. Navigating something this complex requires that we develop some degree of emotional intelligence.

“Emotional intelligence is the ability to monitor one’s own and other people’s emotions, to discriminate between different emotions and label them appropriately, and to use emotional information to guide thinking and behavior.”
– Wikipedia, http://en.wikipedia.org/wiki/Emotional_intelligence

The chart below is quite different from other tables we’ve explored. It is Robert Plutchik’s Wheel of Emotions. The most intense emotions are in the inner circle. The next ring consists of Plutchik’s eight primary emotions—anger, fear, sadness, disgust, surprise, anticipation, trust, and joy. These are the emotions that he says trigger actions that we use to survive, such as the fight-or-flight response.

How is understanding this useful in leadership? Well, for example, if you look at the annoyance/anger/rage continuum, you probably know from experience that people are less likely to act on changing things that are simply annoying. It is also best if a problem has to get to the point of outrage before people act. Knowing when folks are angry enough to act to create change is important.

You don’t need an advanced degree in Psychology to develop emotional intelligence. There are some simple things you can do. The Internet is full of free help on this front, so I won’t go too in depth here. The most important things that you can do fall into two general categories: 1) becoming more self-aware; and 2) increasing your empathy.

Self-awareness requires articulating what you believe, why you believe it, as well as what you are thinking, and feeling. I’m not talking about being in a constant state of navel-gazing. It’s more a matter of taking a second during that time when you are thinking before you speak (You do that, right?), and asking yourself if you understand why you are saying what you are saying.

There are many other things that will improve your self-awareness. Daily writing is an easy one. It can be public or private, and doesn’t need to be lengthy. Try tweeting thoughts that are important to you, not just ones that you hope will be perceived as clever or funny.

If daily writing seems too burdensome, try writing a brief bio of yourself that contains no information from your resume. If you are looking for a less direct window into yourself to begin with, write about someone you admire, and explain why you admire them. It will tell you something about your own values.

Ask good friends, and family members how they perceive your character, attitude, and the general impression that you give . If they tell you things that surprise you, then you can take that opportunity to both further develop assets that they see in you, as well as work on negative aspects of their perception of you that they identified.

The most important path to developing empathy is to listen to people, REALLY listen to them. Believe what they tell you about how they are feeling. Don’t necessarily live by the so-called golden rule – ‘do unto others as you would have them do unto you.’ Consider this instead: “do unto others as others would have done unto themselves.”

As a leader, social responsibility is perhaps the greatest manifestation of emotional intelligence. It recognizes our interconnectedness, and our realization that, as Paul Wellstone put it, “we all do better when we all do better.”